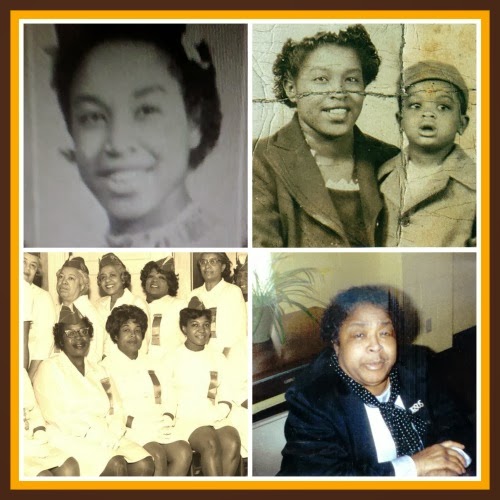 Phoebe Malvina Goodson Thomas (November 3, 1923 – January 8, 2000)
Today, I would like to pay homage to my beloved Grandma, who would have been 90 years old today. It’s really hard to believe that she has been gone for almost 14 years because her presence is still felt in so many significant ways.
Born in Detroit to a preaching father and a college-educated mother, my grandmother was the first daughter in a family that ultimately included nine children (5 boys and 4 girls). My great-grandfather, John Goodson, had moved from Texas to Detroit in order to find work and establish a church. My great-grandmother, Ruby Holley, was a graduate of Prairie View A&M who couldn’t get hired to teach, in spite of her degree. Together, both of my great-grandparents poured a lot into my grandmother, both spiritually and academically.
At a young age, my grandmother exhibited a talent for music, so her parents made sure that she was able to obtain music lessons. Being a preacher’s kid, she played in the church and in later years, served as a choir director for several different churches in the Ohio Valley, where she had moved with her family as a young girl. At one point in time, she had a radio show with her mom called, “The Upper Room.” (It has been said that my great-grandmother Ruby sounded a lot like Mahalia Jackson.)
Academically gifted, Phoebe graduated from high school with honors at the age of 16. She was prepared to attend college to become a teacher, but remained close to home to help with the family. She met Louis Thomas, Sr., my late grandfather, got married, and started a family of her own. My dad, Louis, Jr., was her first-born child. (They are pictured together on the top right corner.)
Following the sudden death of their second child (a daughter named Donna Mae), my grandfather joined the Army and was away from the family while he served in Japan. During that time, my grandmother did the typical day work that women of the time did, but she never lost sight of her dreams. When my grandfather returned from his 2-year stint in the military, the family ultimately grew to include two more daughters, Sherry and Judy, and a son, Robert.
My grandfather had a desire to leave the world of coal mines in southern Ohio, so he relocated to Cleveland to find work. My grandmother didn’t have the desire to move, so she stayed near her family and continued to raise my father, aunts and uncle. She worked hard at menial jobs to help make ends meet, but in her spare time, she was involved in the church, local women’s groups and the education of her children. (My dad frequently shares stories about how she made them go to the library and read on a regular basis. That same desire to learn more has passed on through my grandmother, to my father, and down to me.)  My grandmother also established a Girl Scout troop in their small town so that young Black girls could take advantage of the program.
As my dad and his siblings matured and began creating their own lives, my grandparents, who had been physically separated for years, finally divorced. With her children practically grown, my grandmother worked during the day and went to college at night to obtain her degree in education. Like her mother before her, she was initially unable to find work in the public school system, but went on to become the first African American teacher at the local Catholic school, where she remained until her retirement in the early 1980s, due to issues with her health. Though the doctors (one of whom was once her student) aren’t quite sure how she did it, my grandmother remained with us until the new millennium and then made her transition.
My grandmother’s story is significant not only because she is my grandmother, but also because she is my personal Shero. She was short in stature, but had a tall personality and a joyous laugh that I can still hear today. I have so many memories of her: Going to the amusement park, playing Uno after Thanksgiving dinner, directing the church choir, telling my cousins and I to stop messing with the organ that she kept in her living room, grilling in the garage on every rainy Memorial Day, and teasing me about being a spinster since I wasn’t married. (I’m STILL waiting for the right one, but I’m sure that she knows that.)
I know that she loved all of her grandchildren, but the bond that I had with my grandmother was extra special, since I am the first born child of her first born child. As the story goes, she was in Cleveland on the day before I arrived, anticipating my birth. Since it was a Sunday in September, she had to return to her students the next day, but said, “I just bet that child is going to come after I leave.” She was right; I was born at 10:07 am on the very next day.
Fast forward to January 2000, when my dad and I were summoned from Detroit to her hospital room in Wheeling, WV. In her weakened state, she was able to acknowledge us and even swatted her hand at me when I took a break from rubbing her scalp. Shortly thereafter, after a couple of days of complete silence, she took up her wings and returned home, while I was in the hospital cafeteria getting breakfast.
Though she missed my entrance and I missed her exit, I am grateful for every moment that I was able to be in her presence. My prayer is that I continue to do her proud by living my best life and serving others along the way, just as she did.
I love you, Grandma! Happy Birthday!
familyGrandmalove