Skip to content
By Marcie T.November 6, 2010Leave a Comment on The Rebirth of ‘For Colored Girls’: A Movie Review 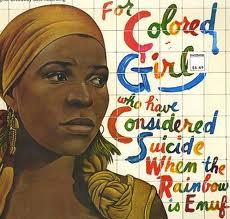 Like many of you, I was anxiously awaiting the release of Tyler Perry’s latest film, ‘For Colored Girls,’ with bated breath. Although Ntozake Shange’s original choreopoem ‘For Colored Girls Who Have Considered Suicide When The Rainbow Is Enuf

,’ was published in 1974 and had been performed both on and off Broadway, I did not become familiar with the work until I took a course in women’s literature in college (in 1984).

What intrigued me most about the story was the strength and courage of the ‘colored girls’ featured in the play; ladies who danced across the stage adorned in yellow, red, blue, green, brown, white, and purple. These women had spent time in Sorrow’s Kitchen, licked out all of the pots, and lived to tell it! Each sistah’s present life had been formed through the pain of her past, yet she still had hope for the future, in spite of the racism, sexism and classism that she faced on a daily basis.
Needless to say, initially I was quite leery of Tyler Perry’s ability to take a story of such depth and transform it into a meaningful film (just as many of his critics were). How could the creator of ‘Madea,’ ‘Meet the Browns,’ and ‘House of Payne’ move beyond ‘coonery buffoonery’ (in the words of famed director Spike Lee) and produce a movie of substance and significance? (Watch the interview with Ms. Shange and hear her express a similar concern.)  Don’t get me wrong, Mr. Perry always includes moments of triumph within his films, but ‘For Colored Girls’ is on an entirely different level.
After watching the film today, I must say that I was pleased with Tyler’s adaptation of Ntozake’s creation. He took a 35-year-old story which talked about rape, incest, promiscuity, abortion, bad relationships and domestic violence, and made it relevant for a 2010 audience. By utilizing his influence within the film community, Mr. Perry was able to enlist A-list Black female (and male) talent, all of whom had the acting chops to bring the story to life and engage the audience from start to finish.
In order to bring the characters together in the film version of the choreopoem, the action centers around an apartment building in Harlem World, NY, which is managed by nosy Gilda (Phylicia Rashad). The tenants include Crystal/Brown (Kimberly Elise) and her long-time boyfriend, Beau Willie (Michael Ealy); ‘good time girl’ Tangie/Orange (Thandie Newton), her sweet younger sister Nyla/Purple (Tessa Thompson) and their overly religious mother, Alice/White (Whoopi Goldberg). We are introduced to social worker Kelly/Blue (Kerry Washington) and nurse/charity founder Juanita/Green (Loretta Devine) when they visit the building, Yasmine/Yellow (Anika Noni Rose) is Nyla’s dance instructor, and Joanna/Red (Janet Jackson) is Crystal’s tough-as-nails boss. Actors Khalil Kain, Hill Harper, Richard Lawson, Omari Hardwick and singer Macy Gray round out the cast. (Click on the links for interviews with the actors.)
Throughout the movie, Ntozake’s poetry is incorporated into the storyline via monologues that take place in the midst of conversations between characters. For those who are unfamiliar with the play, this may seem to be a bit strange (kind of like musicals where people break out into song at the drop of a hat), but Tyler could not ignore the power of Ms. Shange’s words by excluding them from the film. In my opinion, it was those soliloquies that made the most impact, as they gave each actress the opportunity to express a wide range of emotions without being interrupted by her counterparts.
I won’t spoil the plot for you, but I do want to mention a few outstanding performances:

Although ‘For Colored Girls’ focuses on African American sisters, the themes within it can apply to women of any race. As you watch it, you will see traces of yourself, your sisters, your mothers, your grandmothers, your co-workers or your friends. You will be challenged to face your personal truths and deal with your ‘issues.’ You will gain the courage to say ‘Enough is Enuf!’ You will be ready to exclaim, “I found God in myself/and I loved her/I loved her fiercely.”